skip to main | skip to sidebar

How to Stop Islamization

Advice from an Indian (Hindu)

No other people have had more experience with Moslems than Hindu India.

Here briefly are suggested methods of containment and de-Islamization:

Demographic containment
1. Ban muslim immigration
2. Evacuate non-muslims from muslim countries to de-islamise non-islamic countries
3. Selective import of non-muslims
4. Encourage ban on abortion and raise fertility to at least replacement levels
This means there is no demographic vacuum that can let in muslim immigrants

If muslims start it, reply to them in the same manner
Historically only islamic methods work on muslims
What typically happens is that thanks to politically correct liberals and vote hungry politicians
muslims get away with low level violence and in this situation there is no other option

Let me point out another recent [written in 2005] incident
As you know muslims in Iraq have been kidnapping and beheading foreigners
About 3 months ago, they beheaded 12 Nepalese hindus
In response, muslims in Nepal got a 'Gujurat type reprisal'
( about 30000 Nepalese muslims got ethnic cleansed by Nepalese hindu mobs )
and no more Nepalese have been kidnapped in Iraq
Whereas they non-stop behead western hostages

So far in the US, the justice system functions and we can expect the courts will jail jihadist muslims
and in the current situation in the US, ethnic riots are not needed

In India, vote hungry politicians ensure that muslim jihadists are unpunished
The Indian Parliament has about 5 known jihadist terrorists and some of them are even ministers

You have not lived in a country with 13% muslims
Every muslim area is a no-go ghetto, where non-muslims are routinely stabbed, kafir women raped etc
About 80% of the mafia is muslim
When muslims reach 13% in your town, lets see what happens
Hint, watch what the muslims are doing in western europe

BTW, when the muslims were burning the train, they were screaming
slogans praising Osama
Osama T-shirts are very popular among Indian muslims

Ethnic riots are wrong, no matter what the provocation.


If more kafirs give the Gujurat treatment to their jihadist internal muslims,
we will have peace

The last words sent by the Indian Hindu were the following:
The only way to stop islam is to nuke every islamic country immediately
[sounds drastic and horrible, but . . . it may have to come to that. Let us hope not for all our sakes]


Only islamic methods work on muslims


In general muslims resort to jihadism when they cross a local threshold
Indian law enforcement has a ready rule of thumb, any neighborhood with over 30% muslim is considered
' communally sensitive '
Meaning muslims start rioting to ethnic cleanse kafirs

This 30% is a rough rule of thumb, it depends on the organisation and retaliation capacity of the local kafirs
In reality it varies from 20% to 60%, but nevertheless the threshold exists
Indian cops call it 'critical mass'

Cannot be repeated too often:

Demographic containment
1. Ban muslim immigration
2. Evacuate non-muslims from muslim countries to de-islamise non-islamic countries
3. Selective import of non-muslims
4. Encourage ban on abortion and raise fertility to at least replacement levels
This means there is no demographic vacuum that can let in muslim immigrants

In the meantime let muslims stew in their own juice until they reform
Demographically contained, muslims don't resort to violence

Add comment
Load more...
Newer Post Older Post Home
Subscribe to: Post Comments (Atom)
"Whenever any form of government becomes destructive of these ends [i.e., securing inherent and inalienable rights, with powers derived from the consent of the governed], it is the right of the people to alter or abolish it, and to institute new government, laying its foundation on such principles, and organizing its powers in such form, as to them shall seem most likely to effect their safety and happiness."

"What country can preserve its liberties if its rulers are not warned from time to time that their people preserve the spirit of resistance? . . . " --Thomas Jefferson to William Stephens Smith, 1787. ME 6:373, Papers 12:356

Who's Legitimate? Who Cares? We Should.

But a "natural born citizen?" Hardly. Derided as "birthers," "tea-baggers," and "crazies," those who question his legitimacy do have a point.

Obama birth not in Hawaii records

Video: Thanks to Barry Soetoro, There Goes the Neighborhood

from The American Thinker:

Barack H. Obama is the logical outcome of racial socialism. You can see it in his words and actions, and his very physical stance, all signaling his sense of superiority, the flip-side of feelings of inferiority he is reacting against. Obama's core support came from the Leftist alliance of grievance groups in spite of his total lack of relevant experience. Obama is objectively the least qualified person to be elected to the presidency. But the media could not say that, because it would have been non-P.C. to tell the truth.
--James Lewis
What Does 'Racial Socialism' Sound Like to You?
Thanks to Never Yet Melted

Did the Arabs and Persians Discover their Oil?

We discovered the oil that they are selling us and controlling us with.

Not only the Saudis, but wherever oil was found under Moslem lands, WE made that possible. Surprised?

Well, the "oil-producing nations" nations have done a good job of making us believe that they explored, discovered and are producing the oil that they use as a club over our head.

We explored for it, discovered it, developed it, produced it, marketed it.

Today, they can produce and market it by themselves, but had we not paid for the initial exploration and development, they would be as they were before OIL: nomads, roaming over sterile sand.

America is on the brink of another revolution. In a new American TEA Party, citizens across the USA are beginning to protest Obama's giant government programs that reach deep into their pockets.

CLICK ON OBAMA'S SEAL. (Thanks to Ironic Surrealism v.3)

The Magnitude of Muslim Atrocities
Click on it to see and be aware!

Never forget who did this and what they were. Click on the picture and learn more.

BECAUSE I SERVED DURING WARTIME

THAT DOES NOT MAKE ME A "RIGHT-WING EXTREMIST"

urbanadder22
Unbeliever in Islam . . . (for more up-close and personal, go to my blog "On the Back of My Mind" at http://onthebackofmymind.blogspot.com/ --see My Blogs on My Profile page--click on the link below!)

Support Our Troops! Send Them a CARE Package

We All Do What We Can 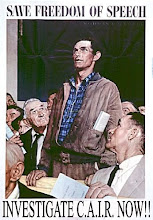 The Saudis want us to learn what is Islam

and we know where most of those who did this came from: Saudi Arabia http://islamicdanger4u.blogspot.com/2008/01/sick-of-sowdis-so-are-we-sick-of-saudi.html

I think being a minority does not make you noble or victimized, and does not entitle you to anything.

I don't hate the rich. I don't pity the poor.

I think that being a student doesn't give you any more enlightenment than working at Blockbuster. In fact, if your parents are footing the bill to put your pansy ass through 4 years plus of college, you haven't begun to be enlightened.

I want to know which church is it exactly where the Reverend Jesse Jackson practices, where he gets his money, and why he is always part of the problem and not the solution.Can I get an AMEN on that one?